Grounds for Divorce in Thailand 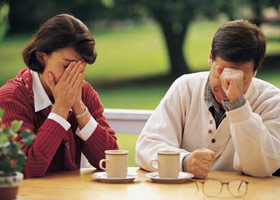 One spouse is guilty of misconduct, as in that of a criminal nature or not. If it causes:

Point 2 is an issue of misconduct that may embarrass or endanger the innocent party in the marriage. As an example your wife goes around town telling everyone that you are a known criminal and wanted by the FBI. Alternatively she has hired Somchai to beat you to a pulp as you had failed to buy her a larger wedding ring. [See: Divorce in Thailand: Defences]

One spouse has caused harm or torture to the body or mind of the other alternatively has seriously insulted the other parties’ ascendants. The innocent party would therefore file for a divorce.

Point 3 is broad ranging for a number of reasons. These could range from physically being tortured by your spouse, or causing mental anguish. This further extends to seriously insulting your spouse’s ascendants, such as his/her parents or grandparents. One spouse has deserted the other for more than one year. The latter may file for a divorce.

This might occur when married couples have an argument and one spouse decides to board an international flight and not return after a year. The remaining spouse in Thailand would then file for a divorce in Thailand. Alternatively, one spouse runs off and even though still in Thailand, not make his or her presence known for more than a year. “Desert” in this clause means separation de facto and animus deserendi. And this also means the separation without any fields of contact more than one year i.e. letter, e-mail, telephone etc.

(4.1) One spouse has been sentenced to prison for more than a year where the innocent spouse was not implicated in the criminal offence.

(4.2) The couple part ways and live separately for more than 3 years as they are unable to live together peacefully.

Subsection 4.1 and 4.2 are self explanatory.

One spouse has been adjudged to have disappeared or has left his/her domicile or residence for more than 3 years and being uncertain if he/she is dead or alive.

Point 5 points to a disappearance that has been adjudged (determine or decide by judicial procedure), hence the court has decided that you have officially disappeared. One spouse has failed to give proper maintenance and support to the other or committed an act or acts seriously adverse to the relationship of husband and wife.

Point 6 might be described as where the one spouse who earns income refuses to provide the other with money to pay the accounts, purchase food etc. Alternatively the spouse may have committed an act which would affect the marriage adversely. The later having a wide discretion. One spouse has been insane for 3 years continuously and is incurable.

Point 8 would be best interpreted for you by your divorce attorney in Thailand. One spouse is suffering from a communicable and dangerous disease which is incurable and may cause harm to the other.

Point 9 would be where one spouse has developed an incurable communicable disease. These could range for a variety of diseases. This may be used during your divorce in Thailand. One spouse has a physical disadvantage so as to be permanently unable to cohabit as husband and wife.

Articles that may interest you